We take you back to the 17th Century when the industry of paper making in Winchcombe is recorded.

The River Isbourne flows North throughout its length, rising on Cleeve Hill and continuing north for 20 miles through Winchcombe and surrounding area's before entering the River Avon at Evesham. The importance of the River Isbourne is that is it is free from iron making it very suitable for paper making, especially of filter papers and at one time there were many small mills along its banks.

In the 17th century the Durham family lived at Postlip Hall and owned the paper mills which had been converted from corn mills previously owned by Winchcombe Abbey.

As early as 1725 John Durham was watermarking and finishing paper manufactured in Holland. By 1734 he was paying rates on Upper Mill and Lower Mill and in 1745 on Middle Mill. John died in 1759 whereupon his son William took over the business and ran it until his death in 1803. Well before then paper manufacturing started at the 3 mills – writing paper at Upper Mill, brown or packing paper at Middle Mill and blue or sugar paper at Lower Mill.

Before the arrival of steam-powered machinery paper making was a laborious process largely carried out by hand. Linen or cotton rags were the main source of raw materials which had to be sorted out, cut into small pieces and converted into pulp. The pulp was produced by beating the rags on an iron platen with an iron, shod wooden mallet, a process which could take all day.

In the early 19th Century the Winchcombe Tovey family became famous makers of 'dandy rolls'. The wire rolls which print the watermark on to the still wet paper. Old Mr George Tovey, wearing a tall silk hat and having fortified himself for the walk, steering a somewhat uncertain course, would carry his precious dandy rolls himself through Winchcombe and up to the Paper Mills. His trade is now extinct and the workshop in Chandos Lane is now a Roman Catholic Church. After William Durham's death the Postlip Mills were leased by a partnership of the brothers Nathaniel, Edward and Thomas Lloyd, who ran the business until 1824, when the owner, Lord Coventry, sold the mills to William Searle Evans, who had been a surgeon in Tewkesbury for many years. The Lloyd brothers appear to have run the business in a spirit of patriarchal benevolence and it provided vital employment for some of Winchcombe's inhabitants. Nathaniel also operated the smaller Sudeley paper mill at the southern end of Castle Street, which used water from the Beesmoor Brook and produced a fine quality handmade writing paper, but this did not seem to have survived his death in 1845. It is now part of the Sudeley Castle country cottages complex on the eastern side of Castle Street. Postlip Upper Mill is the only one which still makes paper, now in particular filters for the automotive and aircraft industry and these are made now using wood resin rather than the rags of old.

Moving on to the present time, the gallery will be showcasing the wonderful work of Belinda Durrant and Lucy Hellberg.

Belinda's work was featured on 'Show me the Monet' where from across the nation artists were invited to submit their work before the 'hanging committee, made up of a panel of 3 renowned art experts, Charlotte Mullins, David Lee and Roy Bolton. The initial application of over 1000 was narrowed down to 35 including work by Belinda, whom amongst the other artists work chosen, was  invited to exhibit at the Royal College of Art in London.
Belinda also regularly exhibits her work at the Royal West of England Academy.

Lucy Hellberg draws her inspiration from a multitude of influences, from folk art to nature, the macabre to Gothic. She has always busied herself sketching and experimenting in all manner of media but lately her focus has been on developing her shadow cuts, drawings and photo etchings. Lucy was drawn to shadow cuts from her love of traditional fairy-tale silhouettes when her mother had given her a silhouette-cut of little red riding hood which is exquisitely intricate and beautiful but despite this it had dark and rather unsettling undertones. Lucy has attempted to capture this in her own work using white paper and shadow mounting to create a softer lace-like quality.

Paper cutting is one of the oldest surviving crafts dating back to the 6th century and is as popular today all over the world. 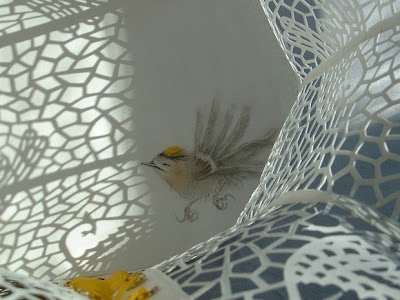 'Goldcrest Corset' by Belinda Durrant (currently being exhibited at the Museum of Lace & Fashion, Calais) 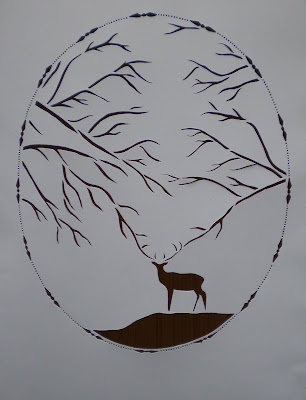